The history of Sorauren Avenue Park, the Sorauren Fieldhouse and the forthcoming Wabash Community Centre is a long story of neighbourhood fundraising and City of Toronto involvement to redevelop a brownfields industrial site for public benefit, a stronger community and economic development.

The current, unfinished municipal park has been created in phases over two adjoining properties: the former site of the Parkdale TTC Bus Garage (and before that, the Dominion Bridge Steel company), and the former lands of the Canada Linseed Oil Mills Ltd.

One major phase of park development remains: the completion of the new public community centre on the old linseed mill property (green outline on map above). 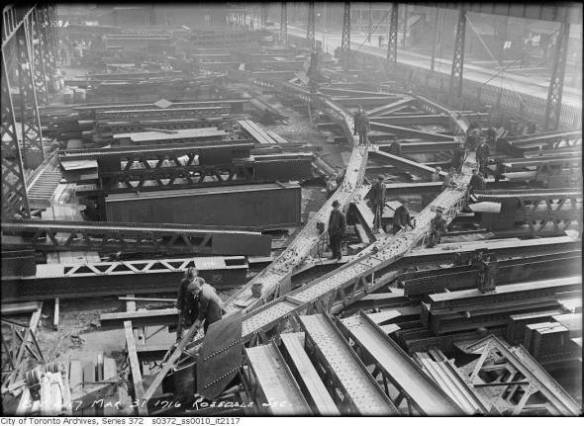 The majority of the park site on Sorauren Avenue was, for much of the 20th century, the home of Dominion Bridge Steel. Among its claims to fame was the fabrication of steel arches and girders that hold up the Bloor Street Viaduct, built during the First World War. The steelwork holds up the bridge today.

Between the world wars, the TTC took over the site to operate the Parkdale Bus Garage until the 1980s. Decommissioned, it was briefly a film studio; a made-for-TV sci-fi series called Captain Power and the Soldiers of the Future was made there.

When the site was slated to become a garage for municipal garbage trucks, the community had other ideas, and advocated for a much-needed neighbourhood park with the City of Toronto, which owns the land through the Parks, Forestry and Recreation division.

After countless volunteer hours and meetings, the first section of Sorauren Avenue Park opened in 1995. It featured tennis courts, a soccer field, baseball diamond and pathway.  Landscaping was built up over the old concrete pad of the transit garage, a cheaper alternative to removing the concrete.

All during this time, the vision for the park included expansion into the adjoining Canada Linseed Oil Mill property on Wabash Avenue. The mill had been decommissioned in 1969, and for some years the surrounding property was a scrapyard.

With an eye to completing the park and building the community centre, the City bought the linseed property in 2000 for approximately $2 million. (Chris Korwin-Kuczynski was councillor at the time.) The property contains the 40,000 sq. ft. former plant of the Canada Linseed Oil Company, which processed flax seed (also called linseed) for industry. The mill was built in 1915 of solid concrete; read the fascinating history of the site by historian David Wencer on spacing.ca here.

In 2003, a City-commissioned feasibility study by Oleson Worland_Taylor Smyth Joint Architects showed the old mill building could be converted into a community recreation centre, an idea supported by residents through several surveys and community meetings.

In 2004, while Sylvia Watson was councillor, the City conducted a major $1-million environmental clean-up of the site, removing contaminated soil and asbestos in the old buildings. But funding was not in place to complete the park and community centre.

Environmental remediation of the Wabash property in 2004. Photo by Gunter Ott.

To address the lack of funding and keep the momentum going to finish the park, a community group grew out of the Roncesvalles-Macdonell Residents’ Association to become the Wabash Building Society, a non-profit corporation with a volunteer board of directors. The WBS (now called the Friends of Sorauren Park) decided to approach the task in phases.

The first phase focused on rehabilitating a smaller building on the linseed property, the 2,000 sq. ft. former office building of the Canada Linseed Oil Mill Company. It was fenced off, abandoned, and for some time had been used by squatters and as a speak-easy!

Thanks to a community fundraising campaign, grants from the Evergreen Foundation, in-kind donations, “Section 37” development fees from nearby Robert Watson Lofts and Ritchie Lofts developments, and City support, Fieldhouse construction began in October 2007. The Fieldhouse was opened in May 2008 at a cost of about $400,000. 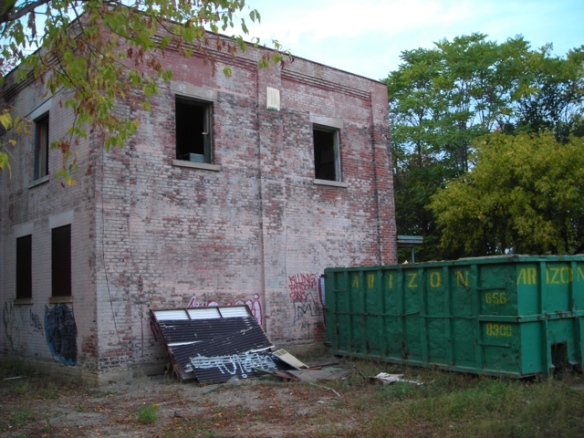 Renovation of the old office building of the Canada Linseed Oil Mills Ltd. into the new Sorauren Park Fieldhouse, 2007-2008

The thriving Fieldhouse provides washrooms, storage space and meeting space for the park. It has been a catalyst for the successful Sorauren Farmers Market, many community programs, and the volunteer-built natural ice rinks (shinny and pleasure skating) every winter, among other benefits.

In 2006, the Wabash Building Society and the City accepted a prestigious Brownie Award from the Canadian Urban Institute for the communications and engagement work done to date by all volunteers on restoring the Sorauren brownfields site to community use.

The WBS then turned its sights towards the 15,000 sq. ft. of land next door. This fenced-off space was where the now-vanished flax grain elevators stood. A rail spur off the Grand Trunk railway (now the Metrolinx Kitchener GO line) came up Wabash Avenue, depositing grain and taking away to market processed linseed oil and other industrial products made in the neighbourhood.

A new fundraising campaign raised more than $60,000 in cash donations from the community and businesses. WBS also successfully applied for grants from Live Green ($125,000) and TD Friends of the Environment ($10,000). Combined with approximately $200,000 in City funding, the land was converted into the new Sorauren Park Town Square.

The fence came down, and the Square opened in July 2014, providing new space for the Farmers Market, outdoor movies, day camps, birthday parties, and other outdoor events. Additional green space and 48 new trees, cared for by the new Sorauren Adopt-A-Tree team, was added to the park. Additional fundraising added new benches.

The last piece of the puzzle remains: approximately 30,000 sq. ft. of fenced-off land, including the old mill building. In 2016, City Council voted to approve the budget for new community centre, with $40 million committed in the capital plan. A City-led community consultation in July 2018 kicked off the project in earnest.

While plans are likely to change through the consultation process, the most recent vision for the remaining piece of land and the community centre was outlined in the 2009 Green Feasibility Plan, also prepared by Oleson Worland_Taylor Smyth Joint Architects and funded by the Federation of Canadian Municipalities and City of Toronto. 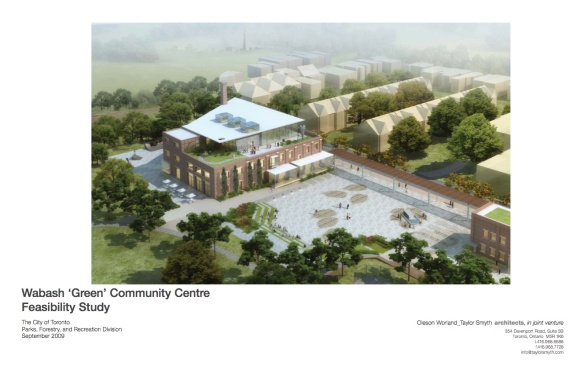 Sorauren Park has been a great success, providing green space and recreational amenities to the region. (Visit our separate website, SoraurenPark.com, for park happenings.) It has also created economic development and jobs. The Farmers Market runs year-round, young park staff are employed during the summer sports season, and real-estate developers frequently cite the park in promotions for their new projects. The community centre will create more jobs in a diverse, growing part of the city.

See you at the park! 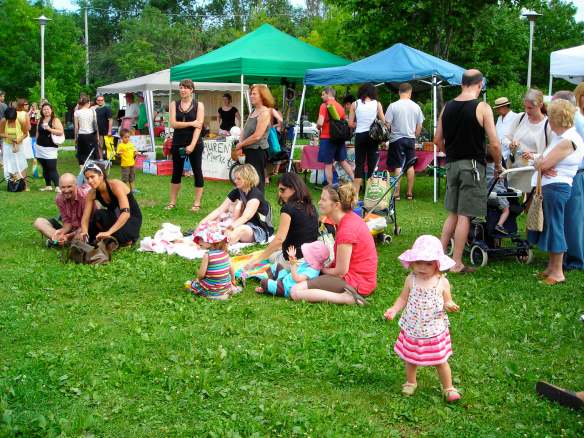 At the Sorauren Farmers’ Market

This website is published by Friends of Sorauren Park

NEXT MEETING:
Usually the first Thursday of the month at 7 p.m. at the Fieldhouse. Check the website prior to meeting dates for confirmation, or subscribe to Sorauren Park News e-newsletter.