This website is maintained by the non-profit Friends of Sorauren Park to promote the completion of the Wabash Community Centre on Wabash Avenue by the park.

Currently a priority for the City of Toronto’s capital plan in the 2017-2024 period, including pre-engineering, design and construction, the plans for the Wabash (North Parkdale) Community Centre involve repurposing an abandoned 40,000 sq. ft. linseed oil mill on the site into a new community amenity. The project has been on the City’s books since the 1990s.

The Friends of Sorauren Park is the operating name for the Wabash Building Society, an all-volunteer, non-profit corporation dedicated to the expansion of Sorauren Avenue Park into the adjacent “brownfields” industrial land formerly occupied by the Canada Linseed Oil Mills Co. (For a fascinating history of the site’s industrial past by historian David Wencer on spacing.ca, click here.)

Working with the City of Toronto, the community, businesses and other organizations, the Friends of Sorauren Park spearheaded the development of the Sorauren Park Fieldhouse (opened May 2008) as the first phase of the expansion.

In 2014, the Friends led the campaign to open the park’s new Town Square. In 2017, the Friends built a new public bake oven for the park.

The final phase will be the development of the Wabash Community Centre.

Friends of Sorauren Park volunteers maintain this site and also SoraurenPark.com with frequently updated news and events for the park; the Sorauren Park News newsletter, and the @soraurenpark Twitter feed, Instagram account and Facebook page.

We meet monthly, usually the first Thursday of each month at 7 p.m. at the Sorauren Park Fieldhouse. You are invited to attend and get involved!

This website is published by Friends of Sorauren Park 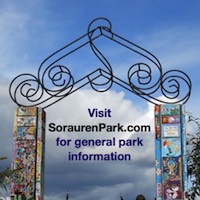 NEXT MEETING:
Usually the first Thursday of the month at 7 p.m. at the Fieldhouse. Check the website prior to meeting dates for confirmation, or subscribe to Sorauren Park News e-newsletter.